Queenslanders are a step closer to enjoying new six star regional integrated resorts, with the proposed $8.15 billion Aquis project in Cairns and the proposed $7.5 billion Broadwater Marine Project on the Gold Coast selected as the two projects able to proceed to the next stage of development.

Deputy Premier and Minister for State Development, Infrastructure and Planning Jeff Seeney said Aquis at the Great Barrier Reef Pty Ltd and the ASF Consortium Pty Ltd would be able to receive a gaming licence if their projects proceeded and met all the necessary environmental, planning and gaming licencing approvals.

“We promised to grow the construction and tourism sectors of the Queensland economy and today’s announcement paves the way for this to happen on a scale not previously seen in our State,” Mr Seeney said.

“In October last year the Queensland Government decided that up to two gaming licences would be offered to encourage the provision of world-class integrated resorts in regional Queensland.

“Labor rested on its laurels when it came to tourism, construction and jobs, whereas we have delivered a strong plan for a brighter future for our key regional tourism centres and their communities.”

Mr Seeney said both Aquis and the ASF Consortium will now have the opportunity to put forward more details about their proposed developments. “The Queensland Government has identified that these projects have the greatest capacity to deliver the requirements for an integrated resort development in the regions, particularly the potential to attract interstate and international tourists as both these centres have international airports,” he said.

“These projects have the potential to create thousands of new jobs in these two key tourism centres, with Aquis indicating its project could create more than 3,700 construction jobs and more than 10,000 ongoing operational jobs.

“The ASF Consortium has indicated its Broadwater integrated resort and cruise ship terminal could create 1,300 construction jobs and more than 10,000 ongoing operational jobs.

“It is on this basis the government will now invite Aquis and the ASF Consortium to submit detailed proposals as part of the next phase of our Competitive Bid Process.”

Mr Seeney said the other four regional EOI participants submitted proposals that were only in the early stages of development and their projects needed a considerable amount of work before they could meet the criteria set down for this process.

“A number of projects faced challenges such as lack of access to an international airport, which meant they could not operate internationally competitive resorts or boost international visitor numbers to Queensland,” he said.

“That said, as with all major projects, the Queensland Government is happy to continue to work with them to progress their potential developments.”

More information on the EOI process for integrated resort developments is available at http://www.dsdip.qld.gov.au/integratedresorts 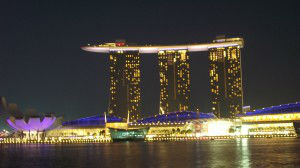